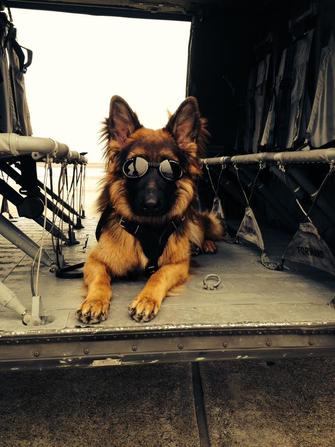 You are truly breeding a very special line of German Shepherds. Ruger's (Bootsmann x Isabell litter from March 15. 2014) first birthday was last week and I wanted to give you an update on his progress. We have attended two events in the past few weeks that have showcased his temperament, social ease, nerve strength, and obedience. We participated in a demo hosted by the Boy Scouts and Ruger worked the room!He possesses a fun loving "command-like" presence that all are charmed by. While this was an overly stimulating environment for him around children from the day I brought him home, but never this many all at once. Ruger is a handsome boy and draws a lot of attention because of this. The kids were so excited to get close to him to pet him, treat him, and then have their pictures taken with him and he behaved like a perfect gentlemen and loved every bit of it. This past Friday and Saturday our search team was invited to partner with a chapter of National Guard for some familiarization training on the UH-60 Blackhawk helicopter and Ruger was a rock star! This was a very unique experience and there was no opportunity to "train" ahead for it; it was a challenge of nerve strength for both of us! The wind, noise, vibration, and movement of the helicopter did not phase Ruger one bit and once again he was sound minded, courageous, and obedient. Ruger is a smart, loveable dog with an incredible temperament...I am so very proud of him and feel truly blessed to have him. 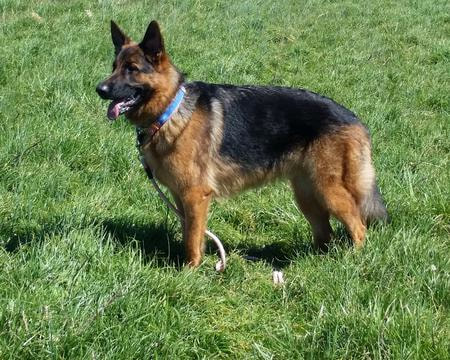 I thought I would send an update on our baby. We have had Raina (Dixie and Mexx litter born April 18th) for a year now. She is the light of our lives! So smart, beautiful, loves her ball and loves everyone! We have been training for Rally and Barn Hunt and she is doing amazingly well. I get compliments all the time. Hopefully her first Rally trial will be in July. She is such a big part of our every day lives and is always so happy! Thank you so much for our baby! 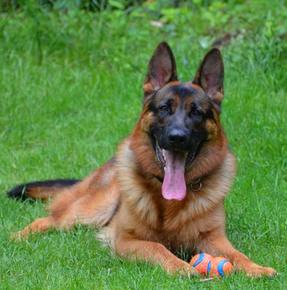 What a wonderful line of GSD's you have! I wanted to take a minute and keep you up to date on Crash's (Lolita x Jango litter form 02/12/2012) accomplishments. This past week we attended the International Police Work Dog Associations (IPWDA) nationals in Butlerville, IN. Not only did Crash travel and perform well we took away the greatest number of certifications amongst all the 300 teams.
Crash is now certified through IPWDA in Basic and Advanced Human Remains Detection, Area Search, and Water Recovery. This week truly showed me what you meant by sound minded dogs.
I thank you again for the time you spent with me in choosing the correct dog for my needs. He truly is a prefect fit and also very handsome.
You are breeding a special line of dog and I'm so blessed to have one. 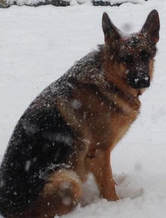 We got our 2 year old German Shepard, Rebel from you. His Mom is Dixie, and his Dad is Orlando. Rebel just turned two years old. He is absolutely stunning and he is so loyal and smart. He is a very good guard dog, has a great nose, and strong ball drive, he is a worker! He is very athletic, we hike with him approx 5 miles a day.

He is also great with my 7 yr old son and his friends. He plays with them and is very gentle. He always keeps an eye on our son. He is a great family dog. We are so pleased with him. He is everything we were looking for a dog. Thank you for breeding such remarkable dogs. He makes us so proud!
Wanted to send you a few pictures of Nico and thank you for the beautiful, well-behaved, healthy, intelligent and gentle dog we got from you. Kids and I can not imagine our lives without Nico. We love him and he loves us back. Boy does he know how to love back!
Shortly after getting Nico we had to move, because our old community had GSDs on the restricted breed list. How unfair is that? It turned out for the best. The new place has a dog park on premises and lots of open space for Nico to play with other dogs and roam around, quite often off leash. We get a lot of comments on how handsome he is and how well he gets along with other dogs, no matter big or small.
I work from home 100% now so on average Nico gets out 6-7 times daily for a total of up to 3 hours, more on weekends.
So I am happy to report that he has a good life with us. He is a member of the family and is being treated as such.
Thank you!
-T. from VA 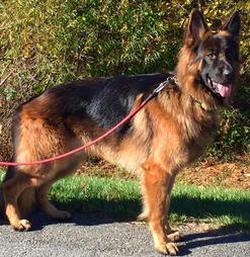 November 3, 2015
We thought you might enjoy seeing how one of your puppies grew up.  Rudi is out of Orlando and Catalaya in April 2014 and he has their wonderful dispositions.  He is confident and friendly with people, happy in crowds, and a great restaurant companion.  We are extremely happy with him.
He can be a handful in training, he's smart but willful, and assertive towards other dogs.  As you can see he's also so handsome that people have stopped their car on the street to admire him.  Thanks for bringing him to us.   Leslie and Lynda
In 2007, we went to visit Shiraz Farms to look at German Shepherd puppies. Leigh asked us a lot of questions to ensure her puppies were going to good homes. At that time, we had a Jack Russell also. Leigh told us that if there were any issues with the dogs getting along, to bring the shepherd back. She also told us she never wants any Shiraz dogs to end up in shelters or rescues, so if anything were to ever happen, bring the dog back to her.
Elmo was our first puppy from Shiraz. Leigh told us he was laid back and sweet. Good breeders know the personalities of their puppies well to make sure they are a good fit for their permanent homes. Elmo's personality as a puppy was the same as he grew older. He was the sweetest, most lovable German Shepherd. He did the breed proud. Many people who had bad experiences with German Shepherds met him and changed their opinion about the breed.
In 2013, we decided to get a second shepherd and contacted Leigh. We wanted a little more spunk with this dog. We didn't want very high energy, but just more independence. Leigh introduced us to a few puppies and described their personalities. She was leaning towards a specific one for us, but wanted us to see the subtle differences in personalities. We chose our second puppy that day, and picked her up a few weeks later.
Over the years, I kept in touch with Leigh. I send her pictures of the dogs and let her know how they are doing. She's always happy to hear the updates.
We lost Elmo last fall. We chose to go back to Shiraz Farms to add another dog to our pack because both of our puppies grew into such beautiful and compassionate adults. Their personalities are so vastly different from each other, but just as described from when they were little. Both have been healthy, beautiful and loving. We look forward to finding our new puppy with the help of Shiraz GSD.
- Bonita from Sterling, VA 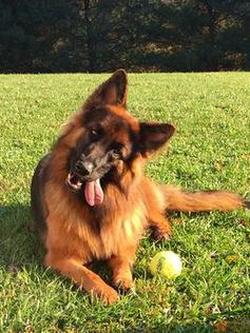 ​10/31/2015  Hi Guy! Just thought I'd send you an update photo of Eva since she will be almost 2 in December.  She is an absolute doll!   We adore this goofy girl and she's becoming quite the frisbee aficionado.  Cannot wait to take her to her first competition in January.  Thank you for giving us one of our greatest gifts in life.

Please see all of reviews under the Google search engine.